The US Dollar jumped by more than one percent against both the Euro and Sterling on Wednesday evening after the Federal Reserve signalled that a third interest rate hike in the calendar year was likely at the central bank’s December meeting.
T
he FOMC took the market by surprise by keeping its interest rate projections broadly unchanged from June. The Fed’s ‘dot plot’ still sees one more rate increase in 2017 followed by an additional three hikes in 2018 (Figure 1). The market had braced itself for the possibility of a downward revision in hike projections, the absence of which sent the greenback sharply higher against its major peers. 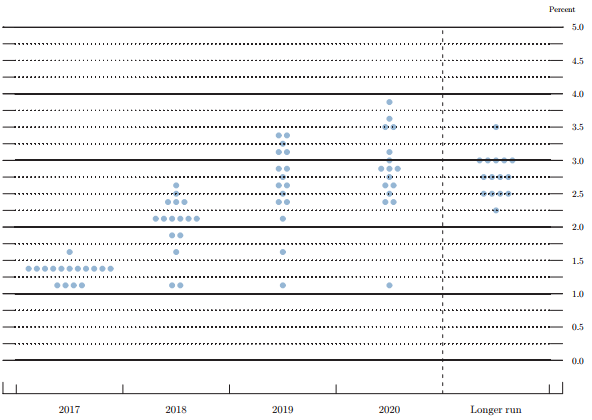 Source: Federal Reserve Date: 21/09/2017
The Federal Reserve’s assessment of the US economy was also upbeat. While the September statement specifically mentioned the disruption in activity caused by Hurricane Harvey, Irma and Maria, the committee signalled that it would unlikely change its assessment of the economy over the medium term. Chair Yellen also noted strength in exports and business investment, while suggesting that labour market slack had largely disappeared and that recent nonfarm payrolls data was well above the level needed to absorb new entrants. Policymakers also deemed the performance of the US economy to be strong enough to warrant a withdrawal of the trillions of Dollars it invested in its quantitative easing programme during the immediate aftermath of the financial crisis. This normalisation of its balance sheet will begin in October, although its impact on the US economy is likely to be fairly minimal.

We think it is clear that the Fed has every intention to hike interest rates again at its December meeting. Providing economic conditions remain favourable, we think the FOMC remains on course to raise rates an additional three times in 2018. This is a considerably faster pace than the market had anticipated prior to yesterday’s meeting. Fed futures quickly adjusted to the Fed’s hawkishness and the market is now pricing in north of a 70% chance of another hike in 2017.

A robust set of retail sales data in the UK continued to suggest that the Bank of England is also seemingly on course to hike interest rates for the first time in a decade at its next monetary policy meeting in November. Sales comfortably beat expectations in July, sending Sterling immediately back above the 1.36 mark against the US Dollar, although this was quickly reversed after the Fed meeting. On an annual basis, retail sales increased by 2.4%, comfortably above the 1.1% consensus and its highest level in two months. The resilience in UK consumer spending will be an encouraging sign to the Bank of England, particularly considering the ongoing real pay squeeze.

The common currency was unable to make any meaningful gains above the psychological 1.20 level against the greenback yesterday, before falling sharply by over one percent following the Fed’s hawkish message. Yesterday revised growth forecasts from the OECD should provide Euro bulls with reasons to be optimistic about the outlook for the Euro-area economy. The OECD bumped up its forecasts for 2017 by 0.3% to 2.1%, putting it in line with the US economy and a considerably faster pace than that of the UK (1.6%). A couple of central bank speakers in Europe today will be the main focal point during currency trading today. ECB President Draghi will be the big draw when he speaks in Frankfurt this afternoon.
Print