Sterling jumps to one year high after inflation bounce

The Pound jumped above the 1.33 mark to its strongest position in a year against the US Dollar on Wednesday morning after yesterday’s inflation data suggested that the Bank of England could raise interest rates sooner than the bulk of the market had anticipated.
H
eadline inflation jumped to a stronger-than-expected 2.9% in the UK in August, a marked increase on the 2.6% recorded in July and its joint highest level in five years (Figure 1). The core measure of inflation, which strips out the volatile component of energy, also rose to an above forecast 2.7% from 2.4%. The increase in prices was broad based according to the ONS with clothing and footwear having the biggest impact, climbing by 4.6% year-on-year. 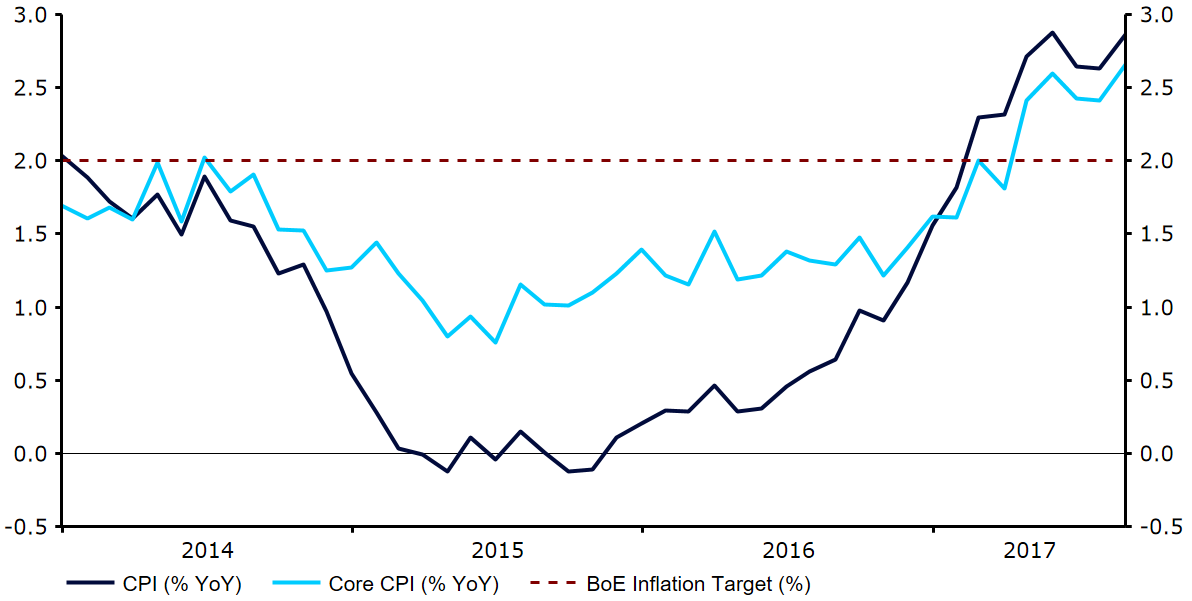 Source: Thomson Reuters Datastream Date: 13/09/2017
We have been saying for a number of months now that the Bank of England will have no choice but to consider the possibility of higher interest rates should inflation approach the 3% mark. While it is highly unlikely that the central bank will raise rates at its meeting this Thursday, we think there will be, at the very least, some indication of discussions among the committee about the bounce in inflation. There is also now a realistic, albeit slim, possibility that chief economist Andy Haldane could join Ian McCafferty and Michael Saunders in voting for an immediate hike. Markets are now pricing in around a 40% chance of a rate increase in the UK before the year is out, a fairly significant jump on the less than 30% chance before the inflation release.

This morning we’ll get additional news on the health of Britain’s economy with the latest labour data. The unemployment rate is expected to remain unchanged, with earnings forecast for a modest bounce to 2.2% in the three months to July.

Away from the UK, the US Dollar ended the London session more-or-less unchanged against the Euro. Investors continued to unwind bearish bets on the currency following a bounce in US Treasury yields and a continued sigh of relief after the worst fears over Hurricane Irma didn’t come to pass. Job openings from JOLTS also came in above forecasts once again, continuing to point to a tightening in labour market conditions in the world’s largest economy. Job openings rose to 6.17 million versus the 6 million estimate in July, although the month previous was revised downwards somewhat.

Economic news was light in the Eurozone again on Tuesday. ECB member Constancio hinted that the central bank’s stimulus measures would remain in place for some time. Constancio claimed that by keeping a sufficient degree of monetary accommodation the Governing Council could be confident that inflation will return to target. This is broadly in line with recent comments from President Mario Draghi that lead us to believe the bank’s quantitative easing programme will remain in place throughout 2018, albeit to a slightly lesser degree of accommodation.
Print